Come have a look at the Gorey CS Transition Year Newsletter and read what the year is all about.

The two women who came to our school were Kate Breslin who worked as a nurse and a midwife in Dublin and London for many years.Brenda Hyland, she joined An Garda Siochana the same year she became Rose of Tralee, which also catapulted her into the world of media and fashion modelling. They were both very nice and they were both easy to talk to.

Etiquette was the second workshop that I’ve done on Thursday 20th of October. It was a very educational workshop and we all learned much from it. At the first we were told about what is etiquette and why it is important. We learned about proper posture, different kind of handshakes, how to properly dine and sent up a table properly which will probably be important in the future. The best part I think was walking on the red carpet like literally it was a red carpet and we had to put a book on our heads and walk to the other side on the room. It was really fun, we were all laughing. The main goal was to teach us good manners and how to present yourself well.

I would recommend this workshop as it would benefit you in many ways and it was really fun.

I really enjoyed the workshop eagles flight, we done this workshop just before we went to Galway and I undoubtedly our group benefited from this. This workshop is all about team building and I believe that our group really bonded while doing this workshop. Firstly we were split into five groups and we played a game called “The Lost Dutchman’s Gold Mine”. The aim of this game was to look at the ‘best approach’ to a project and see how well your team works together. “The Lost Dutchman’s Gold Mine” really showed many peoples competitive side and we got to see who was extremely competitive.

Later on in the day we were tasked with the challenge of building a bridge. We appointed an overall manager who helped every group and then we had 4 co-managers who were given the task of building one element of the bridge with their team. We achieved the record for the quickest bridge built. Over all, this workshop was brilliant.

Self defence was one of the best workshops. It was very interesting and helpful as it is a good life skill to have if we are ever attacked. The workshop lasted for one day up at the rugby club and we had two instructors. They showed us all the different techniques you can use to defend yourself against someone.

The instructors wore safety gear from their heads to their toes, and we wore helmets. It was really fun grappling against each other and the instructors as some people didn’t realise how strong or good they were until this workshop! This was a very enjoyable workshop and I would love to do it again!

Self defence was one of the best workshops. It was very interesting and helpful as it is a good life skill to have if we are ever attacked. The workshop lasted for one day up at the rugby club and we had two instructors. They showed us all the different techniques you can use to defend yourself against someone. 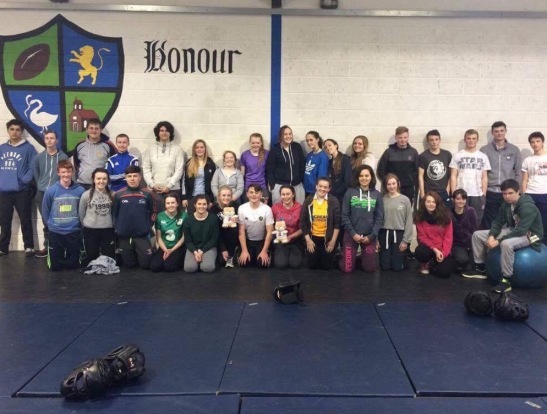 The instructors wore safety gear from their heads to their toes, and we wore helmets. It was really fun grappling against each other and the instructors as some people didn’t realise how strong or good they were until this workshop! This was a very enjoyable workshop and I would love to do it again!

Tinpot Radio is a workshop that I did on the fifth day and it was a bit difficult for me at first as we had to write two scripts, one like an advertising for a thing of our choice and the second one was a 60 second update debate like where you  talk about a topic and one agrees and the other disagrees. It sounds really easy, but it was harder than it sounds. Talking wasn’t the only thing we had to worry about, the timing was also a big part for example on the advertising we only had 30 seconds and it couldn’t be more or less so it wasn’t that bad after we finished recording everything. Whenever we would record two or three groups would go into this small van and inside it was a recording studio, couches and a tv, where we could watch the people in the recording booth.

The last part we did I really enjoyed and it was making our own music playlist where we decided to write the title, artist, how it starts, how it finishes and the time etc so it wasn’t just writing the title and the artist but it was really fun. I was terrified at first about recording but it was definitely a very good and eye opening workshop. –Oliwia Pomietlarz

The poetry slam workshop was a very interesting workshop and was very fun to partake in. The workshop was done by Steven Murray an accomplished poet. Steven started the workshop by reading one of his own poems and giving us his opinions on poetry and how it is written. He then gave us various exercises to carry out such as writing down five of your favourite song lyrics and five habits you have. We did exercises such as these for roughly three periods and they would eventually help us to write our poems.

After lunch Steven showed us some poems by other poets to help us figure out what we wanted our poem to be about. We were then asked to write our own poems they could be about anything, and be as long as we wanted them to be. Once we had written our poems we gave them to Steven who read them and then put them online. This workshop was very enjoyable and taught us all the different steps and ways to write a poem.

The create school workshop was held over two days and the goal was to have a roughly 3-5 minute long film made at the end of those two days. At the beginning of the workshop we were separated into small groups and given the task to create a film trailer in just 30 minutes. The goal of this task was not only to have a trailer made but to also help us understand a bit more how filming works and to have fun.

Once the 30 minutes were up we were showed everybody’s trailer and seen the hard work each group had put in to them. We were then put into two large groups and were given guidance and instructions on how to make a movie. We were then each given a responsibility to handle in our group such as camera man or location manager and decided what our film was going to be about. On the second day we began to film our movie but first our location managers and costume people made sure the rooms and areas we needed to film in were free and that we had the costume we needed for our actors.

Once that was done we went to each different location and filmed the scenes needed, which was a lot of fun to do. When we had filmed everything we went back to the classroom and edited and added music to all the footage. Once that was done and both groups were finished we each watched the other group’s film which was very amusing.